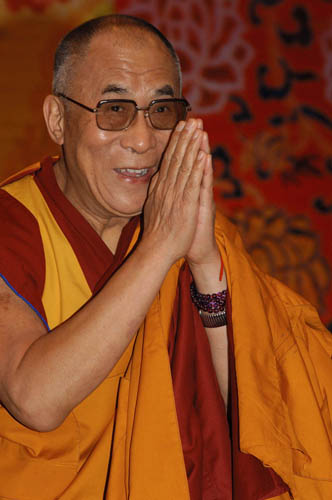 His Holiness the Dalai Lama recently held four days of talks and lectures in Glasgow between 29th May and l 1st June 2004. The Scottish Exhibition and Convention Centre (SECC) played host to the Nobel Peace Prize winner as he shared his Buddhist wisdom with thousands.

I was fortunate to be there for the Teachings on Monday and Tuesday. To see my personal pic's and thoughts of the days click here.

More personal low res pics - some of the venue

HIS HOLINESS THE DALAI LAMA:

His Holiness the 14th Dalai Lama Tenzin Gyatso, is the head of state and spiritual leader of the Tibetan people. He was born on 6 July 1935, and was recognised at the age of two, as the reincarnation of his predecessor the 13th Dalai Lama. He began his education at the age of six and completed the Geshe Lharampa Degree (Doctorate of Buddhist Philosophy) when he was 25 in 1959.

On 17th November 1950, His Holiness was called upon to assume full political power (head of the State and Government) after the Chinese Peoples Liberation Army invaded Tibet. His Holiness escaped to India in 1959 where he was given political asylum. Some 80,000 Tibetan refugees followed Him into exile. Today, there are more than 120,000 Tibetans in exile. Since 1960, he has resided in Dharamsala, Northern India.

Since 1967, His Holiness has been invited to visit various parts of the world to share his message of peace, non-violence and universal responsibility and about the situation of Tibet. In 1989 His Holiness the Dalai Lama was awarded the Nobel Peace Prize for leading the non-violent Tibetan struggle for freedom.

More recently, "A limited dialogue has opened between Tibetan campaigners and China in the past two years, but the Chinese remain sensitive about Tibet. Chinese officials threatened to cut links between Shanghai and its twinned city of Liverpool because of the Dalai Lama's visit there in May 2004."

Destruction of the Sand Mandala, made by Tashi Lhunpo monks, in Tramway followed Distribution of the sand in the River Clyde near SECC
A Panel Discussion 'An Introduction to Buddhism'. Entrance Free
Exhibition open, with festival events throughout the day. Entrance Free
Public Talk by HH the Dalai Lama 'Inner Peace, Outer Harmony'. Tickets £5
Peace Concert, a celebration of diversity

ABOUT THE TEACHINGS AND INITIATION:

Over the course of these three days, the Dalai Lama based his discussion on two classic Buddhist texts: the Stages of Meditation, by the 8th century Indian master Kamalashila, and the Thirty Seven Practices of Bodhisattvas, by the 14th century Tibetan lama Togme Sangpo.

Kamalashila's 'Middle Stages of Meditation'
Acharya Kamalashila's text is a treatise in three parts. Here the Dalai Lama will be referring only to the middle part, which is a comprehensive practical manual on how to cultivate compassion and wisdom, establish conductive conditions for practice, engage in calm-abiding and special insight meditation, understand the relative and ultimate nature of reality, avoid pitfalls on the path, and enjoy the results of practice.

Togme Sangpo's '37 Bodhisattva Practices'
The text by Togme Sangpo is a beautiful devotional poem in praise of the activities of bodhisattvas, those beings whose loving-compassion inspires them to dedicate their lives to the service of others. It is also very practical: addressed to those who are inspired by the great ideal of bodhichitta - the resolve to engage in the path to spiritual realisation in order to be able to help all beings - it describes the qualities and actions of bodhisattvas an ? d exhorts others to follow in their footsteps. The Dalai Lama often presents these two texts together, demonstrating the inseparability of wisdom and compassion both as indispensable qualities to be cultivated on the path to enlightenment and as the natural outpouring expression of the ultimate realisation of that enlightenment.

Mitrukpa Initiation
On the third day the Dalai Lama will give an initiation into the practice of the Buddha Akshobhya, called Mitrukpa (mi 'krugs pa) in Tibetan. Initiation or empowerment is essential in order to enter vajrayana practice, in which the practitioner begins to identify with his or her own deepest level of natural purity, the Buddha nature, right here now. The name Mitrukpa means one who is imperturbable, immovable; it refers to one who is undisturbed by destructive actions or harmful emotions, who remains steadfast and stable in the face of vicissitudes. The dharmakaya arises in the form of Mitrukpa with the particular power to purify past negative deeds and afflictive emotions, and the practice of the sadhana of Mitrukpa is often recommended specifically for purification and for enhancing emotional stability.

Akshobhya ( From Wikipedia, the free encyclopedia.)
In Vajrayana Buddhism, Akshobhya (Sanskrit for "Immovable One", Jp. ???? Ashuku nyorai) is one of the Five Wisdom Buddhas. By convention he is located in the east of the Diamond Realm and is the Lord of the Eastern Pure Land Abhirati, although the Pure Land of Akshobhya's western counterpart Amitabha is popularly far better known.

Akshobhya appears in the "Scripture of the Buddha-land of Akshobhya" (????? Ashuku Bukkyokukyo), dating from 147 CE and the oldest known Pure Land text. According to the scripture, a monk wished to practice the Dharma in the eastern world of delight and made a vow to think no anger or malice towards any being until enlightenment. He duly proved "immovable" and when he succeeded, he became the Buddha Akshobhya.

Akshobya is sometimes merged with Acala (Jp. ???? Fudo myo-o), whose name also means the Immovable One in Sanskrit. However, Acalanatha is not a Buddha, but one of the Five Wisdom Kings of the Womb Realm in Vajrayana.

Prior to the advent of Bhaisajyaguru (Yakushi), Akshobya was the subject of a minor popular cult in Japan as healing Buddha.

About The Young Dalai Lama:

The Dalai Lama was born on 6 July 1935, named Lhamo Thondup, to a poor family  in Taktser in the province of Amdo.  The name, Lhamo Thondup, literally means 'Wish-Fulfilling Goddess'. Taktser (Roaring Tiger) was a small and poor settlement which stood on a hill overlooking a broad valley. "Its pastures had not been settled or farmed for long, only grazed by nomads. The reason for this was the unpredictability of the weather in that area," The Dalai Lama writes in his autobiography 'Freedom in Exile'. "During my early childhood, my family was one of twenty or so making a precarious living from the land there."

The Dalai Lama's parents were small farmers who mostly grew barley, buckwheat and potatoes. The Dalai Lama's father was a man of medium height with a very quick temper. I remember pulling at his moustache once and being hit hard for my trouble," recalls the Dalai Lama. "Yet he was a kind man too and he never bore any grudges." The Dalai Lama recalls his mother as "undoubtedly one of the kindest people I have ever known."

Other publications which have covered the Glasgow and Edinburgh events include The Herald; The Evening News; Scotland on Sunday; The Scotsman; The Times; The Independent; The Guardian; The Observer; BBC News Online..... Some of these were in print, others online.

General - About His Holiness Dalai Lama